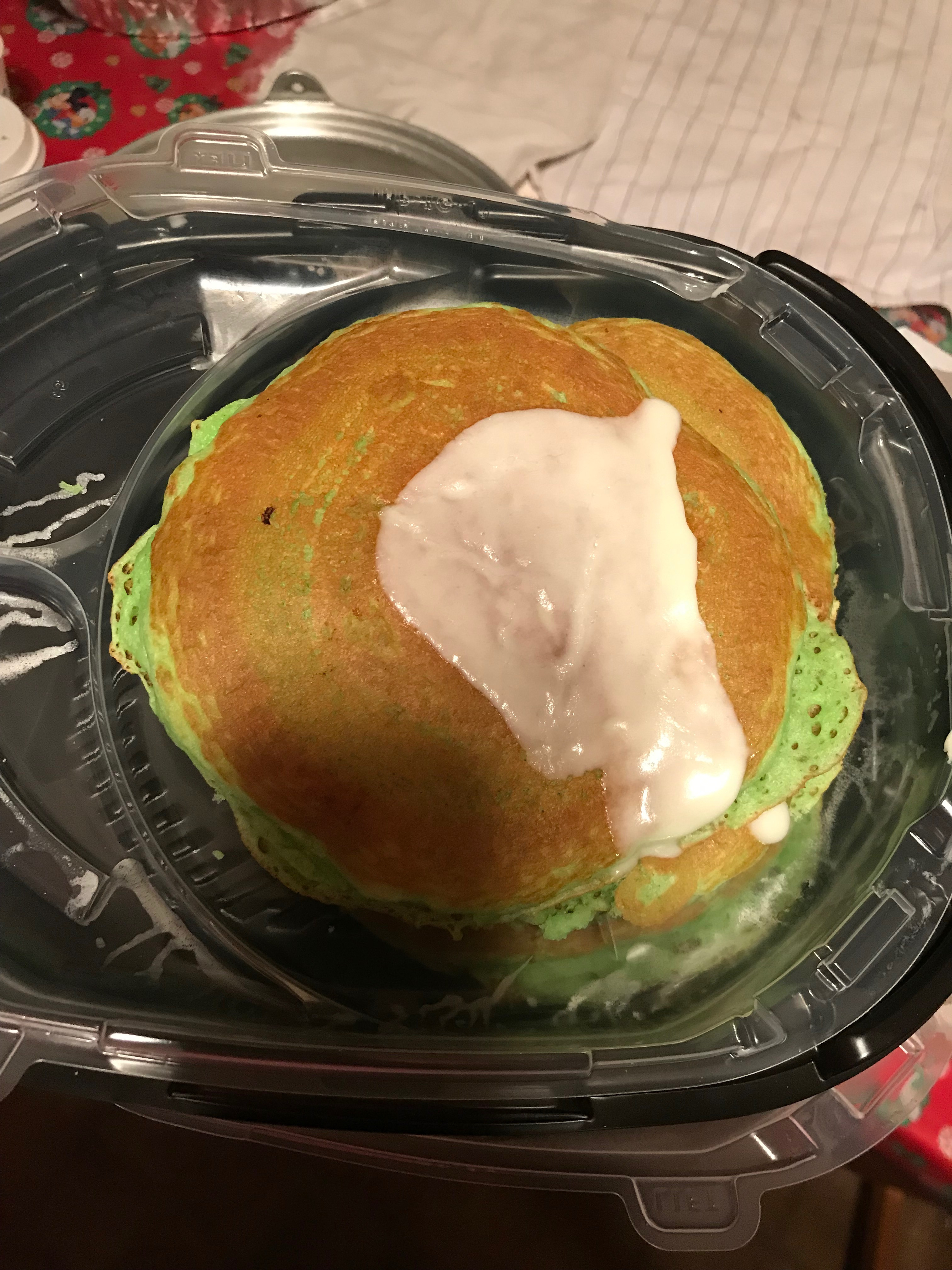 We wanted to enjoy a fun dinner with the kids for Christmas Eve. We opted to order online from iHop from the “Grinch-inspired menu.”

We had seen the “Grinch’s Green Pancakes” advertised on the Hallmark Channel (basically no other channel plays on our TV during the holidays) and the family was excited to try them. Dad was more interested in the Who-Roast Beast Omelette.

The meal turned out to be an overall disappointment.

We ordered it online using the “IHOP ‘N GO” service. Ordering was fairly easy, although I received an error when I tried to use both a gift card and a credit card together. My gift card had less than $3 on it, so I just switched to a credit card for the entire balance.

I received an email informing me that Order # 217865353 was confirmed and letting me know my pick-up time.

I arrived at the restaurant a few minutes early, and had time to observe three servers working hard to serve a Christmas Eve crowd that half-way filled the dining room.

Soon they presented me with my order.

Below is a comparison of the online advertisement and what we received.

I saw the pancakes on the top of the bag, and said to the server that I thought these were to come with red heart candies. “We ran out of those a couple days ago,” she kindly explained. I went to the car, and further inspected the pancakes. It looks like the cook took a teaspoon full of sweet cream cheese icing and plopped it on top, rather than attempting to spread it to cover the pancake at the top of the stack. There was neither green nor white creamy whipped topping on any of the orders either.

I returned inside and let them know that I was disappointed that there was no whip cream. In a huff that expressed “I’m too busy for this” a different server exclaimed “Just a minute” and disappeared into the kitchen. She brought back out a small cup of whip cream (enough that might have barely served two of the orders) and a small cup of .

These were served in to-go containers. We did not take pictures since was not as evident here. Although they were missing the red candies and whipped cream, for those who ordered only pancakes, this was the salvation of their meal.

Our fluffy omelette filled with golden hash browns, shredded beef, shredded Monterey Jack and Cheddar cheese, jalapeño and onion blend and topped with cheese and tangy BBQ sauce & a Serrano pepper. Served with 3 Buttermilk Pancakes or your choice of side. Made with a splash of buttermilk & wheat pancake batter!

The Who-Roast Beast Omelette was the item that looked most like its advertised counterpart. It tasted delicious, and they were not kidding when they advertised “spicy” in the description! Unfortunately, the pancakes were hard to eat when served without butter or syrup.

The entire meal was difficult to eat because no utensils were included – a fact that went unnoticed until we arrived at home.

I recognize that if I had come to order and dine in at the restaurant, the server might have informed me that they were missing the red candy hearts and creamy green whipped topping. The computer was not aware of that. However, I was surprised that they made no attempt to substitute regular whip cream and sprinkles until I asked. In fact, as part of the ordering process, I recall entering my cell phone number. If they felt unsure about making the substitution, someone could have called and asked if this was acceptable.

For a subtotal of $44.90, we received an overall disappointing meal.