A comprehensive look into a disconcerting phenomenon

by Snow White and the Seven Samurai

Gee, Brain! What are we going to do tonight?

Since the inception of “Animaniacs” in 1993, “Pinky and the Brain” (P&B) has become one of America’s most iconic animated comedies. It has been said that these two mice even rival the greatness of Disney’s classic Mickey Mouse. These mice became so popular that after the unfortunate cancellation of the “Animaniacs” series, “Pinky and the Brain” continued to air in their own show from 1995 to 1998. Despite the greatness of the show, one downside has been proven; one’s productivity in other projects is inversely proportional to the attention given to the show.

To prove their mousey worth

In the critically acclaimed article “Their Genes Have Been Spliced” (Laboratory Mice; September 14, 1993), Elmyra Duff represents attention given to the show with the variable B. In explanation of this variable, Elmyra suggests that B be given a value from 1 to 100, representing the percentage of one’s attention occupied by the show. Thus,

But what if the chicken won’t wear the nylons?

In a follow-up study performed by Dr. Otto Scratchansniff, productivity in one’s current endeavors could be represented by a variable P, with the limits of the variable’s values being 1 and 100, where a value of 1 represents someone only being 1% productive, and 100 represents a person being as productive as possible (“Easy to Explain,” Twilight Campaign; September 9, 1995). Scratchansniff points out that when a test subject was shown an episode of “Pinky and the Brain,” their overall productivity decreased.

Are you pondering what I’m pondering?

The author would suggest that the relationship between the variables P and B can be shown by a simple algebraic relationship:

Therefore, P and B are inversely proportional. Given the limits on the two variables and this equation, a graph showing the relationship between the variables looks like the following: 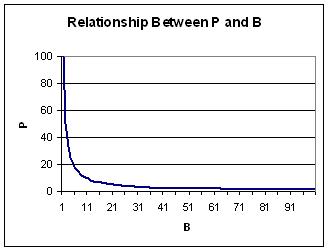 It can be observed that even if only 10% of one’s attention is focused on “Pinky and the Brain”, only 10% productivity is achieved.

Let me put this in terms that even you can understand

A study was conducted recently by German Professor Otto Von Schnitzelpusskrankengescheitmeyer and his lovely assistant, Dot, involving college age test subjects performing menial tasks while being subjected to the influence of “Pinky and the Brain” versus a more wholesome television show. In this study, test subjects were divided into two groups: Wacko and Yakko. Both groups were assigned to write an honors English term paper on the collective works of Shakespeare and their impact on modern society. Group Wacko were forced to watch “Brady Bunch” episodes, while group Yakko watched “Pinky and the Brain” continuously while writing their term papers. Brain activity of each group is represented in the following pie charts. 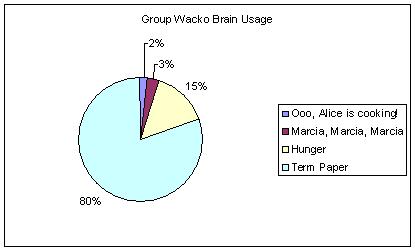 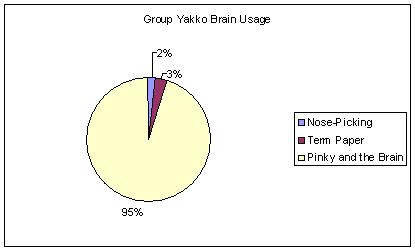 As evidenced by the above pie charts, “Pinky and the Brain” severely influenced the abilities of the test subjects to focus on their tasks. Therefore, we can draw the conclusion that one’s abilities to do anything is affected by the influence of “Pinky and the Brain.” We also learn from this study that Shakespeare’s Romeo was actually wooing Juliet in an effort to take over the world. Ultimately, he fails, as did the student who wrote the paper.

Egad. You astound me.

Another observation to be proved in future research is that the integral of the equation P=1/B is P=ln B, which, when evaluated over a given period, shows that overall productivity over a length of time is severely inhibited by “Pinky and the Brain.”

Come, Pinky, we must prepare for tomorrow night.

The lyrics to the theme song for “Pinky and the Brain” state that “To prove their mousey worth, they’ll overthrow the earth, they’re dinky, they’re Pinky and the Brain.” Though the episodes of the show indicate that Pinky and Brain use outlandish methods to overthrow the earth, their real plan is to air their show until all humans are completely unproductive. Then, and only then, will they take over the world. Narf!

6 thoughts on “The Pinky and the Brain Cloud”