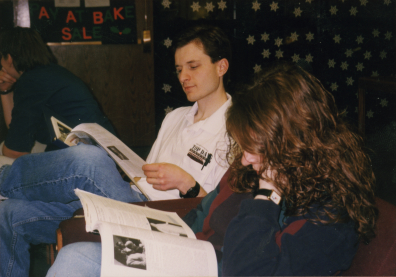 It started out as one of my normal Wednesday routines, early morning institute meetings and then some studying in the Institute lounge. This Wednesday I was particularly intent on getting some reading (that I was quite behind on) caught up. I wasn’t going to let anything distract me and was determined to keep focused on my reading. Out of the corner of my eye I noticed that someone sat down in the chair next to me, but I kept reading. Then a few seconds later I saw a flash (from a camera I figured, but I didn’t think they were taking a picture directly of me and paid little heed to it). However, after the second flash (and I’m told it was actually the third flash) I knew something was going on, especially when I noticed that the person that had sat by me was snickering. I looked up at him and innocently asked, “Did someone just take my picture?” He then went to explain that it had been Brother Church and that he had been taking some pictures for a project he was working on and had asked him to sit next to “Gloria?… No,” he corrected himself, “I believe he said Glora.” I informed him he had heard right and was quite impressed that he’d remembered, it isn’t the easiest name to remember, especially the first time you hear it. I then asked what his name was and he paused for a minute, cracked a darling joke (I adore a good sense of humor), and then he told me his name was Ryan. We didn’t have much time to talk but the conversation was enjoyable. He also mentioned that he thought he knew what Brother Church was up to (I figured that he was probably right). I felt something different about Ryan, and in just the few moments we’d talked I felt like I’d learned a lot from him and about him… his spirituality, his sense of humor, his rugged good looks, and his overall aura impressed me. I was excited when he gave me a business card and casually mentioned- but mentioned twice- that I should e-mail him. I knew from that first encounter that he could easily become one of my nearest and dearest friends and I think deep inside I hoped that some day it might be more than that… it was a wonderful first impression… and with time the impression has only gotten better and better. I’m so very thankful that Brother Church “tricked” us into meeting each other!

It was November 29th, 2000. I was visiting with Brother Church about something or another at the Orem Institute of Religion. It happened that this day we were visiting in the main office. He looked out the window toward the lobby, and casually interjected into the conversation the question, “Do you see that girl sitting right out there reading?” I looked to the direction he was looking, and to my viewpoint, there were two young ladies sitting ‘right out there reading.’ I made some comment asking if he was referring to the one dressed in yellow. This was apparently not the right person, and he resumed talking upon the topic we had been discussing previously.

A few minutes later, our topic ended, he sparked with an idea. He asked me if I was familiar with an advertising project he was working on for the Institute. Even though I was, he explained to me that he was attempting to get photos of students around the institute doing different things, and wanted me to go and sit next to that girl out in the lobby. I was instructed to pick up an Ensign magazine and pose for the photo.

Not suspecting anything, I did as I was told. I opened to a page, posed a bit for the camera, and observed Brother Church walk around the two of us, taking about three pictures. As the second picture was being snapped, it occurred to me that although there were other students in the lobby, he was only photographing the two of us. I was also surprised that the lady next to me had not so much as flinched when the camera flashed. The third photo was taken, which only the two of us as the subjects, and then it was confirmed in my mind what Brother Church was trying to do. He didn’t really want our photos for the ad… he wanted us to make an introduction. I began to laugh to myself under my breath. Brother Church flashed a satisfied smile as he walked around the corner and disappeared down a hallway.

It was at this point that the beauty next to me stirred. She looked up at me, out of a daze, and asked, “Did somebody just take my picture?” I briefly explained to the stranger what had just happened, adding my conclusion that I think he wanted us to make an introduction.

We exchanged names and began conversing. She explained that she had learned good study / concentration skills from living in a family with 7 other siblings. I told her about how Brother Church had tried in the past to “set me up,” but admitted that this was certainly the most subtle of any he had done up to that point. Our initial conversation probably lasted about 10 minutes, as I had a class to go off to. But it was a wonderful conversation, and there was something that immediately clicked there, unlike normal first encounters. I gave her my business card, and invited her to e-mail me if she would like. She said she would do so.

I went to my class, and afterward I slipped into Brother Church’s office. He was not there, so I typed a note for him and left it on his computer screen. The note answered some of the topics he and I had talked about that morning, and casually asked him what he knew of this “Glora” girl that he had introduced me to that morning.

I received later that day, two e-mails, at about the same time. One was from Brother Church, with a glowing report and testimony of her goodness, talents, and person; The other was a friendly greeting from Glorajean herself. And that was the story of our introduction.

I was in the process of putting together a full color flyer to advertise the Institute. It was to include a cropped version of “Lost No More” a lovely painting of the Savior overseeing some lambs. I wanted to include some local reality photos of students in classrooms, students involved in a service project and students just lounging around and relaxing in the Institute building. I had a camera in my suit coat pocket as I sat at a secretary’s desk in the main Institute office. Ryan was in the office visiting generally with Sister Riley and with me. I looked out of the office window and saw Glorajean sitting in the lobby in one of two side-by-side chairs quietly reading. I said to Ryan, “See that cute girl with the long, dark, curly hair? Go sit in the chair next to her and I’ll take your picture for this flyer I’m working on.” Obediently Ryan, strode out to the lobby and sat in the vacant chair. I followed a minute or two later and knelt down about 3 or 4 feet away from Gj and took two flash pictures. Neither of you moved or blinked. I then got to my feet and walked into the main lounge and took some pictures of some more students.

Unfortunately, I was unable to use the pictures of Ryan and Gj because she was looking down into her book in such a way that her hair blocked the view of her face. I had to use other photos for my flyer. Ryan told me a day or so later that after I took the pictures, Gj turned to him and said: “Did somebody just take our picture?” Ryan responded “Yes.” This brief question and briefer answer led to a conversation which included exchange of e-mail addresses and eventually long conversations, and eventually (I surmise) a kiss or two. Both Ryan and Gj dropped in at my office with some regularity with the excuse to see what I was doing, when in reality they wanted to see what each had told me about the other. I did my best to be a good messenger boy, and to fill in the blank spots with as much information and encouragement as I could dream up. It was all downhill from there. Ah! love! Ain’t it grand? And may they live happily ever after!